6.3kWp PV with energy stored in PCM and Lithium Batteries 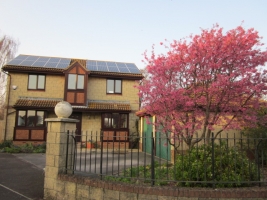 The PV system was installed 21/11/11 to a due South roof with a 31°pitch. On the 2nd anniversary, it reported 8203kWh of generation.
On the 8th anniversary generation exceeded 33,000kWH

From 19/3/2015 a 5kWh Sunamp PV Heat Battery was added storing excess generation in Phase Change Material pre-heating cold water to the combi boiler. In the 1st year, this stored 1600kWh providing >70% of the hot water and savings on fuel bills!

On 24/11/2017 we replaced the existing combi with an Intergas Eco RF30. Excess generation is diverted and stored as heat in 2 (R&D) 5kWh PCM batteries which are used to preheat cold water before the Intergas combi boiler.

Following the replacement of the conservatory an additional 2.4kWp of SolarWatt was added plus a MyReserve battery on 17/10/19. (Note: Generation & Battery storage are not monitored by this dashboard)

How solar energy is used

How do you rate?

This is how you rate compared to similar homes:

You will need to fill in some demographic information to view this widget. Click here to view.
Day Week Month